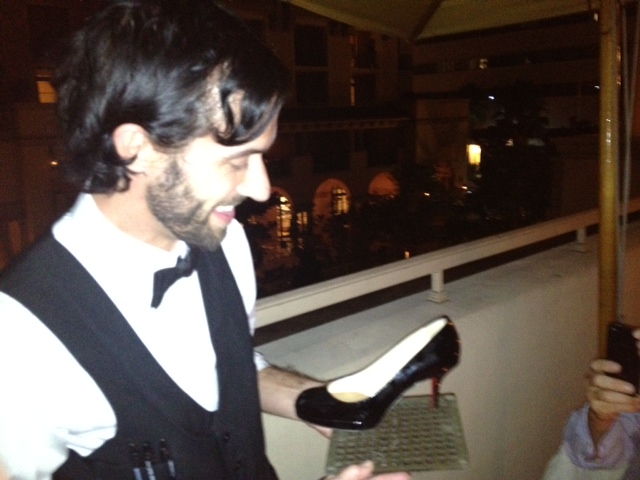 While satisfying my craving for moules marinieres and pommes frites in Bouchon Beverly Hills the other night, disaster struck. I am not talking about the two earthquakes that rocked the area this week, I am talking about the other earth shattering moment when I realized my brand new black patent Louboutin pump was lodged in a tiny grid underneath the table.

The gravity of the situation came in on me instantly. Gingerly removing my foot from the shoe, I inhaled my glass of Sancerre and weighed up the situation. We were deep in conversation, dining with film directors in town for a screening at Soho House. I would have to pick the right moment to interrupt the flow of conversation. It is very unlike me to hold back, but I was becalmed by the magnitude of what was happening.

After a few minutes I left the table and hopped towards the bar in search of a waiter, grateful for my recent pedicure and coral painted toenails. Within moments the news had spread and a deadly hush descended upon the restaurant.

Many iPhone searchlights were employed while the grid was removed. We held our breath as each screw was dismantled with bomb disposal precision. The shoe was held aloft, Cinderella style, the leather glistening in the half–light. A round of applause erupted from adjoining tables as shoe and grid were taken to intensive care.

We waited for the prognosis, while behind the scenes the shoe was given reconstructive plastic surgery. Around our table new friendships were being forged and community singing broke out. Our dining companions, who were from London, observed that in England the best you could hope for would be a quick yank and a trip to the shoe repair. Only in LA would your Louboutin be returned in pristine condition and handed back to you with ceremony, reverence and pride. Only in LA.

Dining out in LA