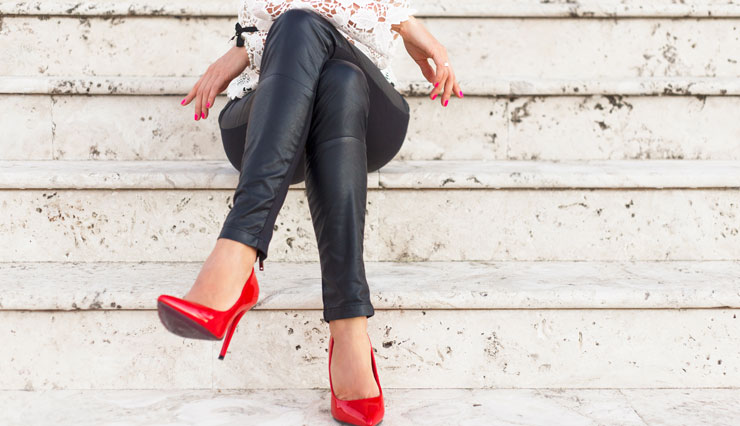 Why, I ask you, is there an international media debate whenever France’s First Lady Brigitte Macron ‘dares’ to wear leather pants, skinny jeans or above the knee skirts? This is an ageist, feminist and cultural issue. There’s none of that nonsense in France. Vogue and Paris Match adore her style. Brigitte is sexy and smart – she’s confident, she’s rock and roll. When asked about the timing of her husband’s run for office she quipped, “Because by 2022 his problem will be my face.”

The suitcase for my trip to Montreal and Paris tomorrow is replete with the eponymous leather pants, short skirts and ‘car-to-carpet’ high heels. As I was packing, I wondered what it is about leather that is deemed so inappropriate? Should I be avoiding silk and velvet while I’m at it, throwing away the suede boots? Are there other fabrics that have a ‘sell by my birth date’ label? Obviously I’ve never been anywhere near lycra or spandex, so there’s no risk of that, but my generation invented denim and now we’re supposed to retire it? I don’t think so. At this point shouldn’t we be shaking our tail feather or are feathers out as well?

It was Bridget Jones’ Diary that first made me realize I needed a female role model. Whenever Bridget had a decision to make she would ask herself ‘ what would Madonna do or what would Madonna wear? It’s a great idea, but as corsets and fishnet stockings proved not to be such a good look at the school gates I eventually I had to look elsewhere for inspiration. Back in those days I came up with Audrey Hepburn and not because of her Children’s Charity – it was for those black Capri pants, boat necked cocktail dresses and her ability to look impossibly chic even when visiting war torn countries. I suppose the more evolved among you might ask ‘ what would Marie Curie do or Emily Pankhurst, Indira Ghandi, Malala?’ I know. Call me shallow.

Now I have a new role model in Brigitte who like me is une femme d’un certain âge which is a compliment in France where the men have a penchant for older women. Doubtless if we live long enough we’ll become femmes d’un âge certain, which is a completely different thing, but that’s not happening yet, well not in Paris where I’m headed in black leather jeans just as soon as I finish this post. À bientôt…